11 July 2019, Melbourne, Australia: It’s seen unprecedented varietal uptake in the US and now the Cosmic Crisp ® Apple is set to take off in Australia thanks to an exclusive agreement between Australian fruit grower, packer, and marketer, Red Rich Fruits, and varietal managers Proprietary Variety Management (PVM).

“Red Rich Fruits has been growing superior quality apples in Australia’s pristine Yarra Valley for more than 70 years. We strive for quality, reliability and customer satisfaction and believe Cosmic Crisp ® delivers this and more, so we’re delighted that the Red Rich Fruits orchards will now be their official Australian home” said Napoleone.

Kathryn Grandy, Director of Marketing at PVM, was also pleased with the result.

“We’re elated to have a solid global partner in place like Red Rich Fruits in Australia that support Cosmic Crisp ® and offer a rich history of growing practices and exceptional fruit quality,” she stated.

A red apple with striking starburst-like lenticels, Cosmic Crisp ® is a cross between the HoneyCrisp and Enterprise cultivars. The variety not only has an attractive appearance and exceptional eating quality; it also boasts large fruit size, vigorous productivity, and good storage life – a win for growers, retailers and consumers alike.

“Red Rich Fruits’ goal is to continually find new ways to surprise and delight Australian consumers. Cosmic Crisp ® is visually very appealing with its’ deep red colour and unique lenticels; but it also has fantastic eating qualities. With its firm, crisp texture, and a beautiful balance of juiciness, sweetness and tartness, we’re confident the variety will fast become a staple apple variety for Australian consumers,” said Palise.

Cosmic Crisp ® is the registered brand name for cultivar WA38; the result of over 20 years of research and development by Washington State University in the US. The name was inspired by the striking starburst-like lenticels on the apple surface, reminiscent of the cosmos; while “Crisp” is a nod to its crisp texture and parentage (‘Honeycrisp’).

Earlier this year it was reported that growers in the US are so confident the Cosmic Crisp ® will be a commercial success; they’re planting them in record numbers and have injected an estimated $10 million USD over four years into marketing the new variety.

To find out more about Cosmic Crisp ®, visit https://www.cosmiccrisp.com/welcome 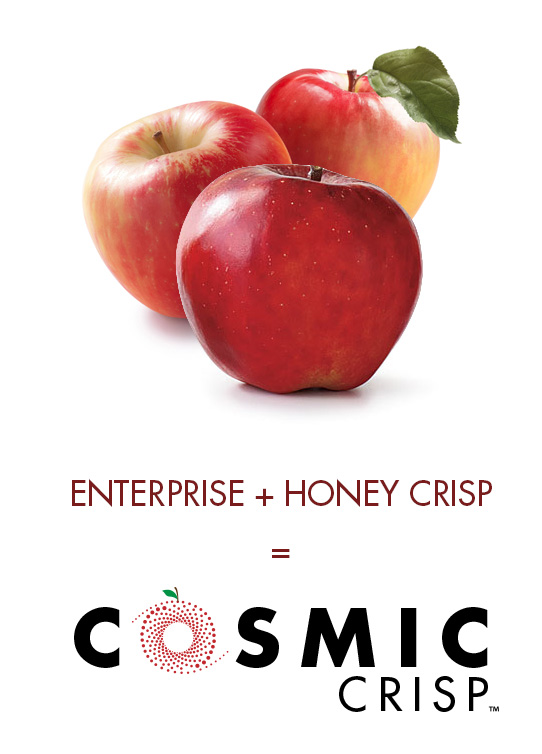